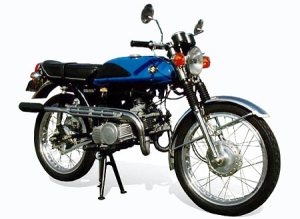 Most called it a Suzuki Wolf but those in the know called it by its correct name – the Suzuki Stinger.
I loved the look of this bike right from the first time I saw it. A twin cylinder 2 stroke 125cc with a 5 speed gearbox, upswept ‘scrambler’ pipes presented in electric blue with black and chrome highlights. I was 14 and I had $250 in the bank – it was a done deal.
A 1971 Suzuki T-125, it was three years old and still in immaculate condition with about 6,000 miles on the clock – great buying for $230. It’s successor, the 1974 Suzuki GT 125 had just been released complete with a front disc brake and ram air cooling – it was slick – the bees knees of 125s but it was heavier than the Stinger and therefore, in my opinion slower and spongier. The GT could stop well though and could out-brake my bike.
My 15th birthday was still about three months away but I wasn’t going to allow a small thing like not having a drivers licence get in the way of my new found freedom.
The road from Havelock North to Waimarama Beach has it all – it’s glorious with long fast straights, sweeping bends and lots of twisty stuff, up and down through hills and river valleys all complete with amazing scenery thrown in for added distraction. It was a regular trip and most sunny weekends saw me heading off for a blast.
The day of my 15th birthday saw me with the ultimate birthday present – my licence and now it was all on. Freedom, adventure, trips to Taupo on wintry, icy roads and for a while with trials tyres fitted, I even rode it as a trail bike on bush tracks and fire breaks keeping up with my friends on their Honda SL 125s and the like.
Alas, after almost a year’s ownership, I was taken out by car making a right turn into a driveway directly in my path. If I’d owned the GT 125 with its front disc brake, I would’ve been sweet but unfortunately, the drum brakes only resulted in a rear wheel lock up and a spectacular slide under the rear of the car plus a couple of nights in hospital for me.
The days of my Stinger had come to an end. Front forks completely rooted and a big dent in the tank where I had smashed my nuts into it. It was also the last time that I ever wore jandals on a bike – stupido.